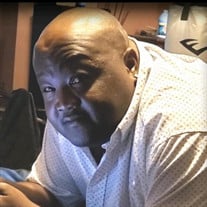 Mr. Dedrick Deshawn "Jack" Butler left the world to go to glory on June 24, 2020 at Regional One Medical Center in Memphis, TN. Born April 16, 1976, he was the son of Mr. Rosevelt Abernathy and Ms. Earlene Butler. "Jack" as he was called was 44 years old. A Marianna native all of his life, Jack was well known in the community. In 1995, Jack graduated Lee High School. He worked as a correctional officer for over ten years before becoming a commercial truck driver. On June the 5th of 2000, Jack married the love of his life Quible Butler and together they raised four beautiful daughters. In 2010, Jack professed his faith in Jesus and was baptized through Church of Christ in Marianna. Jack will be fondly remembered for racing his prized Monte Carlo on the Coca Cola strip, levy and spending time with his family. Jack was preceded in death by his paternal grandparents Mr. and Mrs. Jack and Manley Abernathy and maternal grandfather, John L. Butler. He was also preceded in death by two special Uncles: John Davis and Jerry Butler. Earlier this year, in March of 2020, Jack lost his precious granddaughter Brielle. He leaves to cherish his memory his wife Quible Butler of the home, four daughters: Quible Wallace "Fat Back", Ariel Wallace "Monkey", Delisha Butler "Baby D" and Jacquisha Butler "J Baby". Jack also leaves his mother Ms. Earlene Butler, grandmother Odessa Butler both of Marianna, AR; one brother Wayne Robinson and his wife Phyllis of Marianna; two sisters Mrs. Evonda Williams and husband "Light Bright" Steve of Marianna and Mrs. Brittany Avant and husband "Lil Mike" Michael of Marianna, AR; four uncles Mr. Alfred and Mr. Levester Butler of Marianna, AR, Mr. James Abernathy and his wife Patricia and Mr. Charlie Butler of Marianna, Ar; three aunts Ms. Shirley Butler, Ms Barbara Butler and Ms. Beaula Turner, and four grandchildren: Jordan, Tyliyah, Brayden and Kynleigh and a host of nieces, nephews, cousins and friends. Funeral services are scheduled for Friday, July 3, 2020 at 2:00 PM at Heirloom Funeral Service Chapel. Visitation will be Thursday, July 2, 2020 from 4:00 PM till 8:00 PM at Heirloom Funeral Service. In accordance with directives from the State of Arkansas: All attendees are required to wear a face mask and practice six foot social distancing. Attendees are requested not to attend if they have been in contact with anyone who has tested positive for the COVID-19 or had any of the following symptoms: cough, fever, shortness of breath, fatigue, or respiratory issues/illness. It is recommended that patrons over the age of 65 or those with compromised immune systems not attend. Children under the age of 10 are not required to wear a face mask, but it is strongly encouraged for children older than two years of age to do so. During the visitation, patrons are asked to not have physical contact with the family or the decedent. All patrons will be asked to sign in with their name and telephone number per mandated requirements. In lieu of attending the services, an online guest registry is available. Memorials may be sent to the following: National Kidney Foundation In Memory of Dedrick "Jack" Butler 1818 N. Taylor St. #186 Little Rock, AR 72207 (501) 664-4343 kidney.org

Mr. Dedrick Deshawn "Jack" Butler left the world to go to glory on June 24, 2020 at Regional One Medical Center in Memphis, TN. Born April 16, 1976, he was the son of Mr. Rosevelt Abernathy and Ms. Earlene Butler. "Jack" as he was called was... View Obituary & Service Information

The family of Mr. Dedrick Deshawn "Jack" Butler created this Life Tributes page to make it easy to share your memories.

Send flowers to the Butler family.