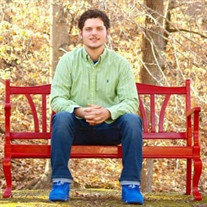 Mr. Dylan L. Lovell, age 23, went to be with the Lord on April 17, 2021 suddenly and unexpectantly in Memphis, TN. Born September 10, 1997, he was the son of Walter “Bucket” Lovell and Donita Hendrix Lovell. He was of the Pentecostal faith and a diesel mechanic. He was preceded in death by his grandparents: Debbie Hendrix Todd, James “Hop” Hendrix and Billye Hendrix, Kimsey Lee Lovell, Sr., and Roy Hendrix. Dylan is survived by his parents of the home; one sister Dianna Marie Lovell of West Memphis, Uncles: Bubba Todd Lopez and husband Danny of Miami, FL and Kimsey Lee Lovell, Jr. and wife Stephani of Cordova, TN and Timothy J. Lovell of Marianna; Grandmother Connie Sue Hendrix of Marianna, and three cousins – Kameron, Kolby and Breyonnia Lovell of Cordova, TN. Visitation with the family is scheduled for Thursday, April 22, 2021 from 12:00pm – 8:00pm at the Chapel of Heirloom Funeral Services, located at 99 W. Main in Marianna, Arkansas. Funeral Services will be Friday, April 23, 2021 at 2:00 PM at the Chapel of Heirloom Funeral Services with burial to follow at Marianna Memorial Cemetery.

The family of Dylan Lee Lovell created this Life Tributes page to make it easy to share your memories.

Send flowers to the Lovell family.